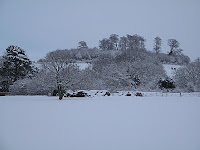 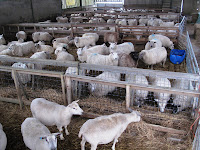 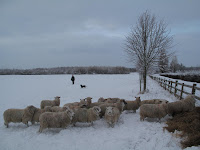 We woke this morning to yet another white covering . . . and more frozen water pipes! Everthing was just so beautiful, the trees, the hedges and the fresh animal tracks.

The first job was to bucket water to every water trough and then give all the girls (ewes) in doors fresh hay. Then we jumped in the truck and went and fed all the sheep out doors, finding them in the snow was a challenge.

We then had a call from the organisers of Oxford Market saying tomorrows Farmers Market has been cancelled. This was not great as we'd had six lambs butchered and packed especially. We then sent an email out to all our local friends and neighbours to see if anyone wanted to stock up their freezers! Luckily the orders came flooding in . . . although we still have one fridge full of lamb left.

Brian is all booked up to shear the rest of the ewes on Friday, but he has 1500 of his own sheep to look after and with all the snow his workload has also tripled, so the the best laid plans are in the hands of mother nature . . . which can't be a bad thing after thinking about how beautiful the farm has been today. Just a shame about the frozen pipes!

Bye for now
Roly, Camilla, Boris and Meggy
Posted by www.camillaandroly.co.uk at 14:08