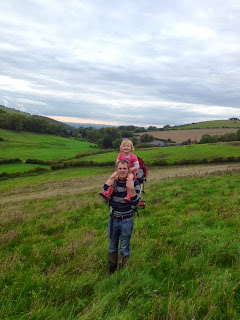 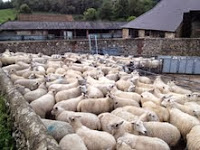 We are slowly getting used to our new beautiful surroundings. The South Downs are just amazing and our sheep look so happy and we are loving being able to see them as we drive back home towards the farm.  We did our first big sheep job last week and brought all the ewes into the yard to select the ewes who we will keep their female offspring for our future breeding stock.  I love this annual job as it is selecting the 'prettiest' of our girls . . . although Roly is more interested in their genetics, previous lambing history and general performance as a sheep!  Molly and Freddie took part too and Molly has found a favourite spot in the yard which she is using as a dancing stage so the flock were even being entertained! We've selected 83 and they are in the 'croft' field which is right outside our window which is lovely.

We've had a couple of very wet days here but it still looks beautiful and then makes us appreciate the dry sunny days even more like this morning.  I stand at our kitchen window and look up to our far arable field and then beyond to our neighbours Aberdeen Angus cows grazing on Newtimber hill, wow!

Plans are already underway for our lambing open days, we will keep you posted on dates but we are so excited by using the buildings here for mothering up pens, it really will be special and will create a wonderful atmosphere which we can't wait to share.

Bed and breakfast, shepherd for the day, mail order, visits will all be up and running soon, watch this space and place your first Saddlescombe lamb order! 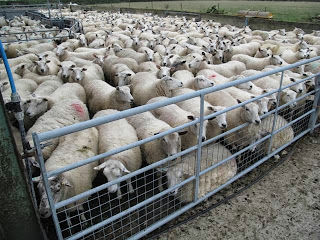 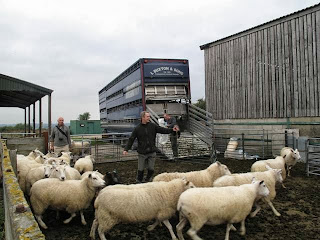 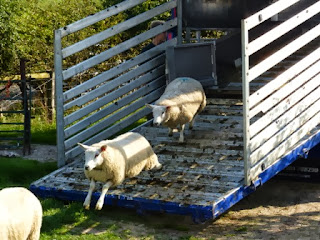 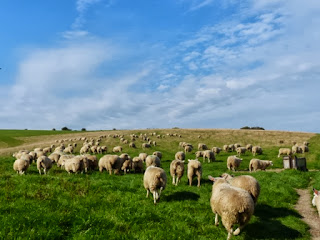 The sheep move began on Sunday, when Roly with the help of lots of lovely neighbours in Little Wittenham helped gather the flock and bring them back through the woods, over the clumps, and then pen them up in the farm yard ready for their road trip the following day. Generally this went well . . .  although an enthusiastic dog who was taking its owner for a walk through the woods spooked the flock and the manoeuvre became a little more interesting. On exciting the woods (through a different gate than then one shown to the team of helpers during their briefing!), the flock were then ambushed by 20 Hereford cows as they walked back over the Wittenham Clumps Nature Reserve for the last time. After a second regroup, the flock finally arrived back in the farm yard.

The next morning Roly and John Sargent helped load up 300 ewes, 76 ewe lambs, 296 lambs and 8 rams into the two lorries each with 4 levels, not to mention lifts, stairs, compartments, etc - you name it, these lorries had it - we (sheep included) were all fascinated! It look about 2 hours to load the 2 lorries. The road trip itself to West Sussex took 3 hours. As the sheep unloaded it was the noise of the doors releasing and the sheep running down the ramps and the lambs springing in the air which all contributed to it feeling like a really historic moment for us and as we learnt later for the National Trust too who told us that us farming Saddlescombe was the first time since the 1940's that a family and their flock have settled here. The sun even shone for us!

We stood and watched as the ewes gradually spread themselves across the open field in front of us and they seem to think so far that Sussex grass is pretty tasty!  We walked back to the farmyard with members of the South Downs National Trust team who had come out to watch them arrive to greet the boys meandering their way through the farmyard to their new home in the donkey wheel paddock behind our house.  Basil was in front of course.  It is just the best feeling eating our breakfast and seeing them outside, Molly can't quite believe it!

Thank you to all our friends, neighbours and customers from Oxfordshire who have all been so kind. Please keep in touch with us and mail order will be up and running soon!  We are really looking forward to making friends down here and welcoming visitors to the farm and sharing with them this beautiful place.

Posted by www.camillaandroly.co.uk at 14:18 No comments: