One weather extreme to the next 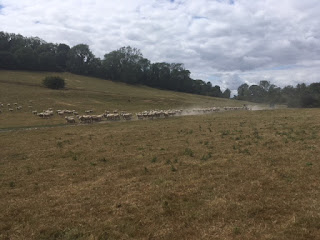 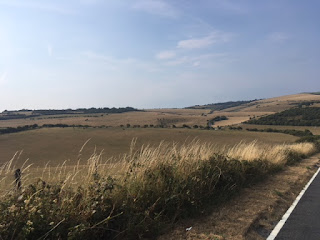 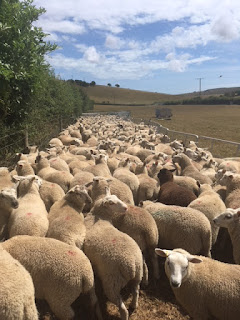 Last winter was the wettest we have experienced since being at Saddlescombe.  We were calving in the snow and mud and then more mud during lambing.  May seemed to be going to plan but with a slight curveball of a very hot bank holiday, little did we know what was to come, we had rain on the 12th May and then nothing until the 29th July.  Even as I write this in September and looking at the photos above reminds me how dry it was and how quickly we forget and how quickly the grass did recover once we did finally get rain.

It was a really difficult summer and lots of extra decision making around whether we need to feed the animals or not.  We just about managed.  We ended up giving our 1 year old cows some extra feed but the moment we had rain and the grass grew we stopped.  The sheep we had to move around regularly to ensure they had enough to eat.  We weaned the lambs and they suffered a bit, they are under a bit of stress anyway leaving their mums but the fresh grass just wasn't there for them.  This affected our lamb supply and we are now on catch up.  Thankfully the farm now looks green again and our shoulders have relaxed a little!

Big decision this year has been to move calving to after lambing next year.  This year was hard in the snow and mud, so by leaving it until later we hope for warmer weather and conditions for them.  This has of course meant that William joined the cows a little later, but he seems very content!

Roly went to collect 20 new shearlings (they will be first time mums next lambing) to join our flock yesterday.  They already appear very at home.  They are Lleyn breed.  We will be welcoming a new Lleyn ram too in a couple of weeks, we are buying him from our near neighbour Hugh Passmore.  So it feels nice to start autumn with some new stock.  We love the seasons with the fresher mornings and heavy dews, it feels even more welcome this year because of the summer we've had.

We all continue to miss Belle very much.  Fly was very quiet and reserved for a while but is now doing really well and her lovely nature is flourishing.  She is still very much Roly's dog but she gets plenty of tummy tickles from all of us.

Camilla, Roly, Molly, Freddie, Finch and Fly
Posted by www.camillaandroly.co.uk at 04:39 No comments: