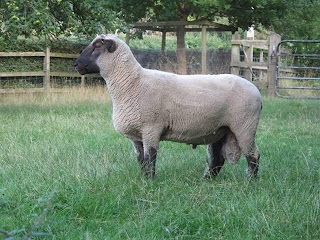 Meet a new member of the team – Bruce.  He's a Primera ram from New Zealand – which we think  sounds more like a Japanese car than a breed of sheep. We have chosen him because one of his qualities is ease of lambing – which will be key when we move to West Sussex later in September, as our flock will be lambing outdoors, hopefully unassisted – providing Bruces’ CV is correct!

We need to keep Bruce on his own in a small paddock for about 4 weeks, during which time any health issues will become apparent! If after 4 weeks he's still looking fit and healthy we'll give him one more medical - including the 4 T's - teeth, toes, tone and testicles - and then he can join the rest of the boys, Basil and co.

The big move is fast approaching which is both exciting and daunting. We'll post an update of progress shortly.

Posted by www.camillaandroly.co.uk at 12:05 No comments: