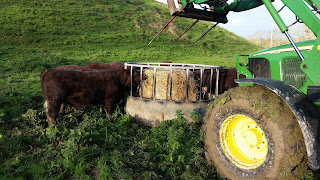 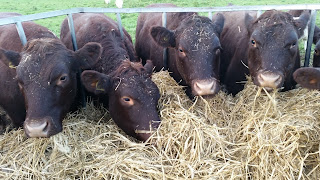 The winter routine is here.  Layers on and breaking the ice in all the puddles and water troughs on our way out of the farm to school.  Roly is busy on the tractor taking barley straw to the cows and silage to the calves and steers, (neutered young males). The cows are enjoying their barley straw and their calves are enjoying some more fattening silage in the field next door, which they have access to via a creep gate.  This is a gate which the calves can easily fit through, but the cows can't, particularly now some of them are very visibly pregnant.  This might seem a bit mean on the cows!  But it is for a very good reason.  We have to make sure the cows do not get too fat, otherwise they can have real problems when they come to have their calves.

Our vet Nanja comes next week to test the cows for tuberculosis.  Tuberculosis remains a complex problem for the British beef industry.  Early stages of the disease are difficult to detect but the animal can still be infectious at this stage.  The current government policy of eradicating the disease is to test all beef herds in the UK and slaughter any animal which reacts to the injection they are given.  The test has to be done by a vet, so it has become a routine visit which no farmer looks forward to.  Nanja will inject them with a type of tuberculin (a complex mix of proteins), the cows immune system will respond to this by either producing an inflammatory response or not.  Nanja will return 3 days later to measure any responses at the injection site and give a result as to whether they are infected or not.  It is an incredibly tense time.  If a lump comes up that cow will have to be slaughtered.  The UK is divided into TB zones which determines how regularly a herd will need to be tested.  We are in a 4 year zone which is the least frequent testing, so we are in a low risk area.  Some herds have to be tested every year.  We will keep you posted on our results....

The rams have been in with the girls for what we call two cycles.  A ewes cycle is 17 days, so after the first cycle we put raddles on the rams.  These are like harnesses with a crayon on the front.  So for the second cycle any ewe which is marked with the crayon we know will be lambing later.  It is a useful management tool.

We have already booked up for scanning next year in January, when all the ewes will be scanned so we know what lambs they are each having.  How quickly the year goes by!