The media and first signs of spring! 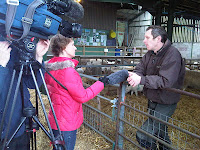 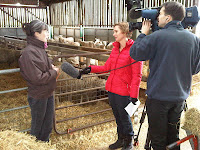 Schmallenberg virus has hit the headlines this week. Yesterday our phones were constantly ringing from local press wanting our thoughts on how we are coping and preparing for our 250 ewes who are due to lamb in 3 weeks time. Roly spoke on the Jeremy Vine show yesterday and we had BBC Oxford television out on the farm this morning which you can see from the photos.

The virus was first detected in a village called Schmallenberg in Germany last year. The virus is transmitted by midges which were possibly blown across the channel at the end of last summer, hence most of the cases have so far been on the east coast. As the UK lambing season progresses more cases are emerging, as yet none in Oxfordshire. We thought we might have got away with it as our January lambing went well but our vet Adelle advised us this morning that the ewes are vulnerable during the first months of their pregnancy so there is a chance the March flock could have been exposed to the midges later in the year.

It seems very ironic as the ewes all look really well and are tucking in to all their yummy food and are totally oblivious to our fussings over them.

The good news is that there is no risk to human health from the virus. Adelle explained this is due to the particular type of gene sequence which the virus carries does not affect humans. So all our bookings to be shepherds for the day with us and our lambing weekends are all safe to go ahead as planned and we're looking forward to seeing everyone.

All the January lambs are having their first taste of the outdoors today! Spring is in the air! It was also their first taste of being moved as a group which is often chaos as the lambs don't know what to do or to make of Belle. This will make more room in the sheds for the March flock and ensure they all have plenty of trough space to feed their growing lambs.

Camilla, Roly, Molly, Boris and Belle
Posted by www.camillaandroly.co.uk at 06:12