As hard as it is to leave the farm it is so important, not only to have a break, but also to see our friends, learn from other farmers and get new ideas.

We have just returned from a weekend to Norfolk, where we visited Tom Goucher an old college friend of Roly's, they both went to Harper Adams Agricultural College. Tom farms with his parents and brother, and like us are tenant farmers, but their produce is very different and varied - wheat, barley, rye, suger beet, potatoes, onions, carrots (photo below) and parsley, which we were lucky enough to see being harvested (video below).

From Tom's we went on to see Nick and Susie Emmett, and their dog Moss (photo below). Nick is our shepherd mentor, and Roly is always on the phone to him! Susie is a partner of Green Shoots Productions, Susie, amongst other things, has helped and inspired hundreds of farmers across the world to host farm visits. It was great to catch up and we always learn so much from Nick and Susie, with Nick planting a few ideas in Rolys head . . . this time 'out door lambing'. We lamb our flock indoors, which although is nice for us when it is raining, there are many disadvantages, so, much research to be done and we will report back! 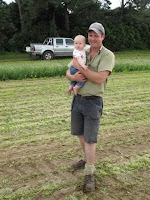 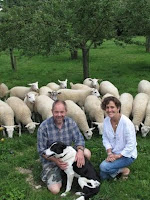 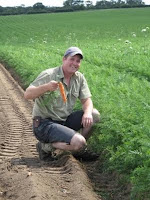